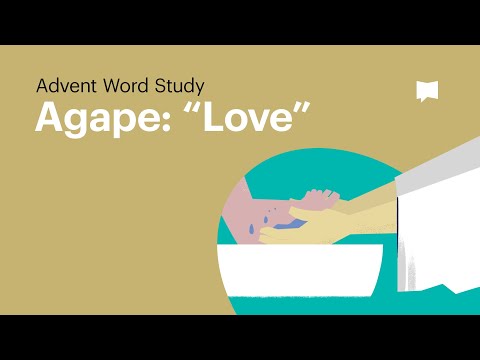 If you’ve heard of Jesus, you probably know about one of his famous teachings called the “Golden Rule”: “Do to others what you would want them to do to you.” This actually is a restatement of something else that Jesus said, that the meaning of life is to love God and love your neighbor as yourself. That’s really beautiful. But what does he mean exactly by the word “love”? It is an unclear word in English because you can love your mom and you can love pizza. If the word “love” means the same thing in both of those cases, your mom is going to feel real bad. So what did Jesus mean in his language? Well, first of all, this “love your neighbor” phrase is a quotation from the Hebrew Scriptures where the word for love is “ahava”. However, the language Jesus spoke and taught in day-to-day today was a cousin language of Hebrew. That is, Aramaic, in which the word for love is a “rakhmah”.

But then, as Jesus’ followers spread his teachings around the world, they translated them into Greek using the word “agape”. But here is what is fascinating: the earliest followers of Jesus who wrote the books of the New Testament in Greek didn’t learn the meaning of “agape” by looking it up in ancient dictionaries. Rather, they look to the teachings of Jesus and the story of his life to redefine their very concept of love. So, one time Jesus was asked about the most important command in the Jewish Scriptures. He first quoted from the ancient prayer in the Torah called the “Shema”: “Love the Lord your God with all of your heart.” So, love for God is the most important thing. But then, Jesus quickly followed up by saying another command from the Torah was also the most important: “To love your neighbor as yourself.” So, which is the most important, loving God or loving your neighbor? Jesus’ answer is “Yes”. To ask the question means you don’t get his point. For Jesus, they are two sides of the same coin.

Your love for God will be expressed by your love for people and vice-versa. They are inseparable. So this makes it clear that for Jesus agape love is not primarily a feeling for someone else that happens to you, like our phrase “I fell in love”. For Jesus, love is action. It is a choice that you make to seek the well-being of people other than yourself. Jesus also went on to teach that genuine love for God and others means seeking people’s well-being without expecting anything in return, especially from people who are in difficult situations who cannot repay you even if they wanted to. According to Jesus, this kind of generous love reflects the very heartbeat of God. He took this even further. Jesus said that the ultimate standard of authentic love is how well you treat the person that you can’t stand. Or, in his words, “You shall love your enemy and do good to them, expecting nothing in return.” For Jesus, this kind of enemy-embracing love imitates the very character of God himself.

Now, we wouldn’t be talking about Jesus still today if he had only said things like love your enemy. This is how he actually lived. Jesus was constantly helping and serving the people around him in very practical and tangible ways. And, he consistently moved towards poor and hurting people who couldn’t benefit him in return. He showed love for the forgotten ones, the people who usually fall through the cracks. When Jesus eventually marched into Jerusalem, he made himself an enemy of the leaders of his people by accusing them of hypocrisy and corruption.

But then, instead of attacking his enemies to overthrow them, he allowed them to kill him. Jesus died for the selfishness and corruption of his enemies because he loved them. After Easter morning, Jesus and then his followers claimed that it was the power of God’s love for the world that was revealed in Jesus’ life, death and resurrection. As the Apostle Paul put it, “God demonstrated his own agape for us in this: while we were still sinners, the Messiah died for us.” Or in the words of the Apostle John, “God’s own agape was revealed when he sent his one and only son into the world so that through him, we could have life.” For John then, this leads naturally to the conclusion, “Beloved ones, if that is how God has loved us, then we ought to show love for one another.

So, Christian faith involves trusting that at the center of the universe is a being overflowing with love for his world. This means that the purpose of human existence is to receive this love that has come to us in Jesus and then to give it back out to others, creating an ecosystem of others-focused, self-giving love. That is the New Testament meaning of agape love. .